Summing up the Summer

It all starts in the spring, when the racing season ends and we can let our bodies rest and recover for most of April. We start working again May 1st, slowly getting back into the rhythm of training: rollerskiing, running, biking, hiking, strength, and a lot of time lying on a shooting mat trying to fix or improve whatever wasn't quite right last winter.


In June, it gets real. The hours go up and so does the level of intensity. Our yearly schedule is made up thirteen 4-week blocks, and during the training season, each week of each block has a particular focus such as volume, intensity or recovery. During an intensity week, we may do four or more high intensity sessions, but the overall hours are relatively low, whereas a volume week consists of  twenty or more hours of training, most of which are low intensity. All of this is to say that in June we start to get tired! July seems easier, because you are used to it by now and the sun comes out.

This year, I went to Ostersund, Sweden with my team for three weeks starting in the end of July. During the first two, it was predominantly rainy and in the 40's and 50's. (...IN THE FORTIES.) Then in the third week, the sun came out all day and all night too. We headed to Torsby, Sweden, where for a few hours each day we went underground into a refrigerated ski tunnel, complete with a biathlon range.


I bought a new rifle stock while in Europe and got to test it out there with Gerold Sattlecker from the University of Salzburg, who uses force plates and other equipment to track the movement of the rifle and the forces acting upon it.


When we flew back in the US in the beginning of August, we thought we'd timed our arrival well to miss the summer heat wave, but no! It hit just in time for our August rollerski races back in Vermont.


Unfortunately neither of my races went well. I really struggled to shoot well with the new stock and lost way too much time zooming around the penalty loop. Back to work! We returned Lake Placid and started another training block. The heat continued to be a challenge for us, but at least the peas in my garden flourished. Annelies led a girls' adventure group this summer, which was a huge hit. I helped out on "biathlon day" and had a great time.

Then I got really, really tired and needed a break so I went on vacation to the Jersey Shore with my best friends. This is very typical for the end of August.

September began and vacation was OVER! September means Testing Week for US Biathlon. In one week we did a biathlon race, a roller skiing time trial, an uphill running time trial, and the Climb to the Castle, which is a public roller ski race up the Whiteface Mountain toll road. Also in early September, my friend Rob Bradlee was in town for a coaches' conference. I "guided" him on a 3-hour roller ski which turned into a 5-hour fiasco during which we got so lost, so far away from civilization, that we had to stop and ask someone where we were, and then use their home phone (for lack of cell service) to call for a pick up... We were over 35 minutes away from Lake Placid and over an hour from where we'd left our car. I'm sure he will join me again next time!!! A few days later I got a back spasm, and my parents visited! Guess which was more fun?? I'll give you two hints:

Thanks to lots of help from Celeste at Sports Medicine here at the Olympic Training Center, and various massage therapists, I am back in action. We are now in training block 6, week 4. I have 24 hours on my schedule this week, which prompted me to make this meme: 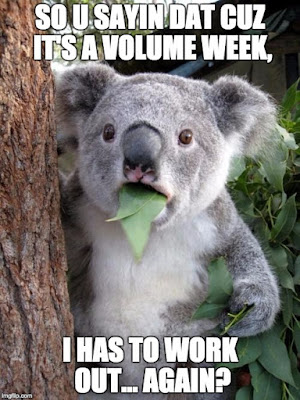 There are only two more days, but more than nine hours remaining...

And just like that, the training season will soon come to a welcome end. We have our second set of roller-ski trials on October 10th and 11th in Jericho, VT. From there, I am planning to join the rest of the A-team for a training camp in Utah, pending my qualification at the rollerski trials. October will roll into November and we will say farewell to beautiful brisk Fall days and hello to dreadful, rainy dark and cold ones. But by then it will be almost December and snow will be on the way! You see how it goes... flying by!